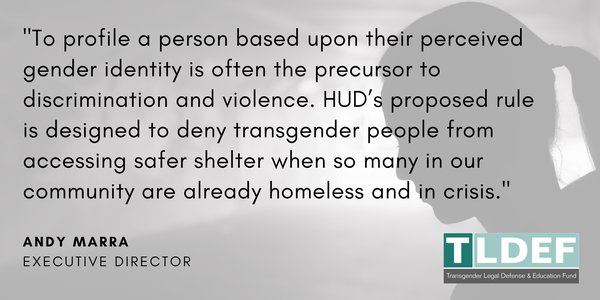 "To profile a person based upon their perceived gender identity is often the precursor to discrimination and violence. HUD's proposed rule is designed to deny transgender people from accessing safer shelter when so many in our community are already homeless and in crisis" - Andy Marra, Executive Director

According to the 2015 U.S. Transgender Survey:

Trans people make up .9% of the population in the US but are 165x more likely to be homeless than cisgender people.

The proposed new HUD rule would normalize and encourage discrimination against a community that is already more likely to experience homelessness and violence. Another attack from the administration, another commitment from TLDEF to end discrimination based on gender identity.